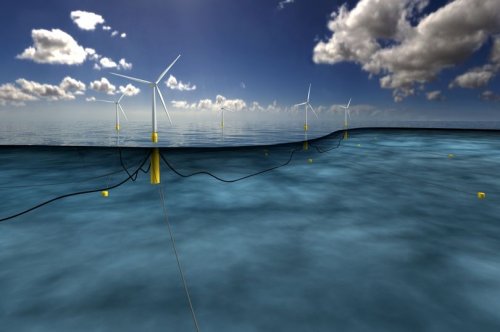 Plans to build floating windfarms in the Celtic Sea to generate clean power and create thousands of green jobs have taken a major step forward after being shortlisted by UK Research and Innovation (UKRI).

The South West Floating Offshore Wind Accelerator has been chosen to work up a detailed bid for over £30m of potential government funding provided through UKRI’s flagship Strength in Places Fund. UKRI is providing £50,000 of early-stage funding to support development of the bid following a successful stage one application.

The project aims to build on Cornwall and Plymouth’s world-renowned excellence in offshore renewables business and research to fast-track the construction of large scale floating offshore windfarms in the Celtic Sea from the mid-2020s onwards.

Floating platforms can access stronger winds in deeper waters than conventional fixed offshore wind turbines. The Celtic Sea, which is an area off the coast of Cornwall and West Wales and south of Ireland, has one of the best wind resources in Europe.

A report published earlier this year by ORE Catapult and commissioned by the Cornwall and Isles of Scilly LEP and the Welsh Government said a floating wind industry in the Celtic Sea could support 3,200 jobs in the South West and Wales and £682m of spend in the local supply chain by 2030, powering hundreds of thousands of homes.

Nationally the industry could support 17,000 jobs and generate £33.6 billion of economic activity, with huge export potential.

The UKRI’s first stage award will allow the project partners to work up a full stage bid for submission to the SIPF in November, which has £236m available in the latest funding round and makes awards of between £10m and up to £50m in exceptional cases. Awards will be announced next year.

The quality of the South West’s bid was commended by UKRI’s lead on the Strength in Places Fund, David Sweeney, who said: “I am delighted to be able to award early-stage funding to this bid which has great potential to benefit the local area through supporting innovation and sustained growth, and strengthen collaboration between industry and our world-class research base.”

Steve Jermy, Executive Chair of Wave Hub, which is based in Hayle in Cornwall, said: “We’re delighted that UKRI has recognised the strength of our bid and that we can progress to the next round. The Great South West has the potential to make a decisive contribution to the UK’s offshore wind energy targets by developing a new floating wind industry that can create thousands of jobs with huge export potential.”

Mark Duddridge, Chair of the Cornwall and Isles of Scilly LEP which has been driving the Celtic Sea initiative for the last two years, said: “This project is about global innovation in a high value industry and is a cornerstone of our Local Industrial Strategy. It is an opportunity to lead a post-pandemic green recovery and make a huge contribution to the UK’s economy and the fight against climate change.”

Professor Deborah Greaves OBE, Head of the University of Plymouth’s School of Engineering, Computing and Mathematics, and Director of the Supergen Offshore Renewable Energy Hub, said: “The South West is perfectly placed to advance the development of offshore renewable energy on behalf of the whole country – something that has been acknowledged by UKRI through this funding award. And the University, with its pedigree for research, development and innovation in the renewables sector, is excited to be at the heart of the floating wind project as we now look to work up a full bid.”

Prof Lars Johanning of the University of Exeter, Deputy Head of Engineering, said: “The deployment of industrial scale floating offshore wind (FLOW) in the Celtic Sea represents a once in a generation opportunity to drive investment and economic growth in Cornwall & the Isles of Scilly, Wales and the Great South West. Developer interest and activity has already commenced and there needs to be an industrial response to the supply chain opportunity. This has now seen a further boost.”

Drystan Jones, Port Operations Director, Falmouth Docks and Engineering Company, part of the A&P Group said: “A&P Group welcomes this funding, which furthers the objectives of the South West Floating Offshore Wind Accelerator.  A&P’s ambition is simple – to help make Falmouth and the wider South West economy a prime hub for the offshore wind sector.  A&P will play its part to ensure the South West has the skills, facilities and capabilities to deliver the construction of floating offshore wind projects in the Celtic Sea.”

Tim Dwelly, Cornwall Council cabinet member for economy, culture and planning said: “The development of the Floating Offshore sector is so exciting for Cornwall because of its potential to generate green energy on a massive scale whilst simultaneously creating new employment in the marine sector, which is a sector in which Cornwall already excels.  This project is about ensuring that local businesses and residents are given the support and skills they need to be at the forefront of this new industry as it grows rapidly in the coming years.”

Edwina Hannaford, Cornwall Council cabinet member for climate change and neighbourhoods, said: “This ambitious programme will drive the development of floating offshore wind farm technology for Cornwall and bring environmental economic benefits for our residents with a significant increase in renewable energy generation and the creation of a raft of green jobs. It is another example of how we are ramping up our plans to tackle the climate emergency and help Cornwall become carbon neutral by 2030.”

Councillor Tudor Evans, Leader of Plymouth City Council, said: “We’re focusing on driving recovery, so the prospect of creating new, high-value jobs which help address the climate emergency is welcomed. Plymouth is home to world-leading research institutions and businesses that will be able to maximise this brilliant opportunity, so we look forward to working together in this partnership to deliver a winning proposal for the SIPF funding.”

Steve Hindley, Chair of the Great South West Partnership, which includes the Local Enterprise Partnership areas covering Cornwall and the Isles of Scilly, the Heart of the South West and Dorset, said: “The South West Floating Offshore Wind Accelerator is a fantastic project with national as well as regional significance. The Great South West is a powerhouse economy with the ambition and potential to become the UK leader in the green and blue economy, with projects such as this one delivering clean energy and generating clean growth.”